SANYO DENKI CO., LTD. has launched the newly developed 75 A capacity SANMOTION R 3E Model servo amplifier. The lineup of the 3E Model series—which aims to pursue 3 E’s: evolved performance, eco-efficiency, and ease of use—has been enriched with the addition.
This new model is 36% smaller and 40% lighter than our conventional 100 A model, realizing the smallest system in the industry.*1
It is suitable for applications such as semiconductor manufacturing equipment, machine tools, and general industrial machinery. 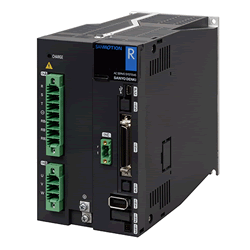 Note: The information stated in this release is current as of March 28, 2016.
“ SANMOTION ” is a trademark of SANYO DENKI CO., LTD.